Sarah Marshall was the focus of a recent PBS article and was described as a “…sort of cyber guinea pig, providing a steady stream of data to academic research”; having worked on MTurk for the past five years, she estimates having completed approximately 20,000 academic surveys. Reddit's reaction to this article suggests this figure may be quite low by the standards of other workers.

A central argument of the PBS article is that many MTurk workers are no longer naïve to common social scientific methods, that such experience has altered workers' behavior in ways that may make them unsuitable for certain research, and — at least judging from the article's focus — this problem may largely be due to those, like Sarah, who have been working consistently on MTurk for years, often referred to as “super-turkers.” 1 Perhaps, if non-naiveté is the product a long work history, MTurk's high turnover rate (at least as of 2010) provides a naïve group of workers at lower HIT levels. 2 Can researchers just restrict their studies to those having completed under 5,000 to 10,000 or so HITs and assume safety?

Exchange tasks are ubiquitous in the social sciences. They involve two or more partners giving, receiving, or negotiating the exchange of tokens and form the basis of much of our research on trust, cohesion, power, prosocial behavior and, more broadly, rational choice. The PBS article mentioned that many workers are so overexposed to such tasks that they no longer respond as normal humans. I encountered hints of this altered behavior from a worker who admitted that, regardless of a study's content, she or he always splits tokens 50/50 with exchange partners. This behavior has simply become a reflex.

To what extent have workers been exposed to exchange tasks? 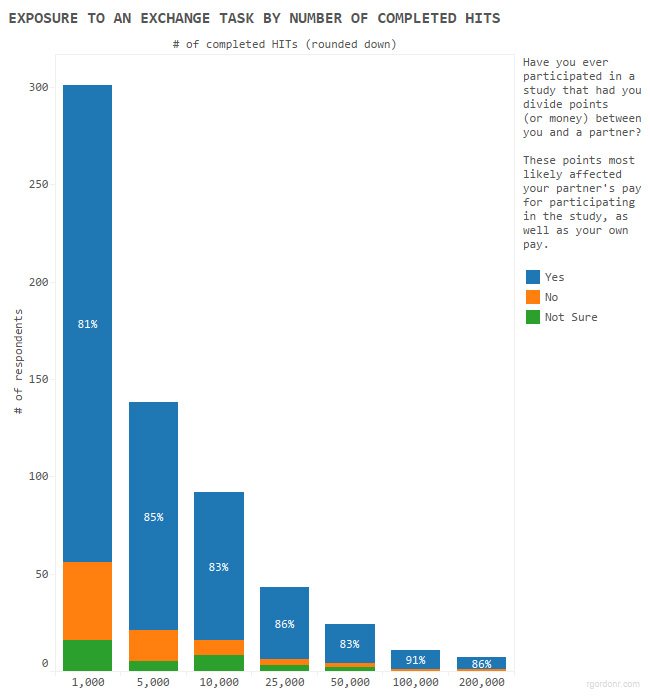 Although I did not measure “overexposure” (i.e. how often a worker encounters such tasks), we can at least infer that the problem of inital exposure is extensive and not limited to super-turkers.

An element common to experimental research involves telling participants they are interacting with real partners when, in fact, their “partners” are merely bots delivering pre-programmed responses.

To what extent have workers been exposed to fake partners? 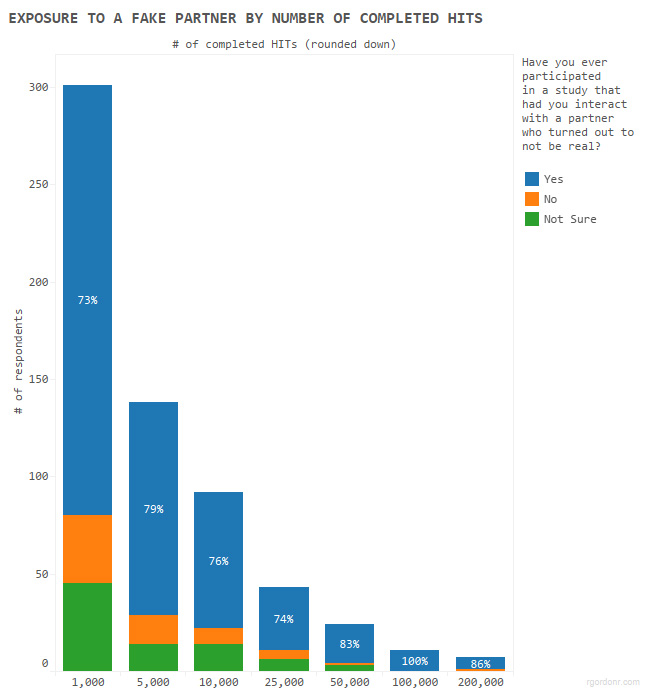 Exposure to fake partners was generally lower than exposure to exchange tasks but tended to increase more strongly as participants reported having completed more HITs. However, encounters with fake partners appear to be common across all HIT categories.

What does this mean for researchers?

The problem of non-naiveté is not due to super-turkers alone; given that most academic research is restricted to those who have completed at least 1,000 HITs, issues related to previous exposure may now be systemic — even by the time workers reach the 1,000 HIT threshold, many may already be unsuitable for certain research.

I did not measure the extent of exposure, only whether or not one had been exposed to common elements of social science research. It's difficult to tell if workers' exposure to exchange tasks at lower HIT levels is strong enough to induce mindlessness in their responses. However, any level of exposure to a fake partner seems damaging and, in my view, this exposure is sufficiently widespread to seriously compromise the effectiveness of such deception on most MTurk workers.

Although few, my data do show potentially naïve workers are still available. If common research designs are going to be used, I believe they should be accompanied by novel methods for seeking out such workers — and they will need to be novel if they're going to achieve accuracy without inducing the very suspicion they mean to detect. 4